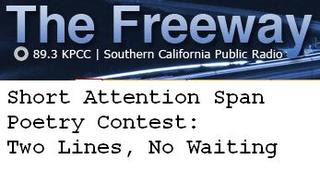 I enjoyed judging the poems in the Short Attention Span Poetry Contest on The Freeway at Facebook. They had a range of subject matter broader than most newspapers. Which made it difficult to judge what two-liner was best. I relied on my poetic aesthetics to make the determinations. What resulted is a top ten. Here they are:

Sticky summer dreams of snow--
of ice and frosty window-glow

This poem is the winner in my book, because it is the strongest one when it comes to stirring pure sensations. And it intellectually rewards rereading by offering both euphonic alliteration and Frostian rhyme.

This poem has nearly the same qualities as the winner, with less musical economy (wordier). A close second.

I don't feel much safer leaving the ground
after I'm searched by thousands standing around.

Bed in a stuff-sack, home on my back
How I wish that my life were as simple as that.

This poem has both sensable metaphorical imagery and moving philosophical charm.

When you look my way I must come near;
For your eyes tell a story I can't wait to hear.

Arnold took office and the state budget took a bath
Do you think that Gray Davis is having a good laugh?

Drama, discovery, outrage and mystery
are what you find when you research your local history

This poem surprises the reader with layered newsiness and a clever rhyme working like frosting on the top.

This poem should win the humor award. Flat out intelligent and funny.

It is an emergency, my hand is charred
By the time I write out the fifteenth card.

The slightest flaw in this strong poem is that the circumstance needs to be explained. It could have been delineated in the poem by stating fifteenth emergency card (but then you'd have two emergencies).

Looking for evidence that the economy is growing,
As I watch my unemployment benefits slowing.

Economical (in every meaning of the word). Seemingly inherent alliteration and rhyme.

OK, hope you enjoyed my commentary. I'm currently running a Halloween Poetry Contest. You can check it out by going to http://1031poetry.blogspot.com
Posted by Don Kingfisher Campbell at 5:45 AM